Garden of Good and Evil

God expelled the first humans, from the Garden of Eden, and placed a mighty angel at the east of that garden…..”to guard the entrance to the Tree of Life.” The backyard of my house, a pre-civil war trading post in Old Westport, resembles what the founder, Joseph Smith, of the “Church of the Latter Day Saints,” refers to, in his new understanding of Genesis, as the location of Eden. During his trip through Westport and Kansas City in 1831, he had a revelation regarding the location of Adam and Eve’s first garden.

The old tree that grows in the backyard, we call, the garden of good and evil. Gazing at the tree will make you think you are near the entrance to the garden man was banished from.  A hole in the tree has fascinated our pets for years. Something is down there, the dog and duck haven’t gotten it yet, but continue to bark a warning at the tree on a daily basis. 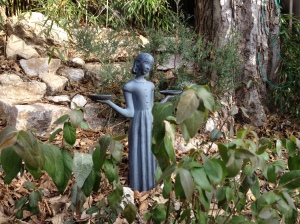 When Westport was young, Joseph Smith and his followers chose this area as their new, “Zion,” as they termed it. It is said that the Mormons, were first run out of New York and Pennsylvania, then organized a headquarters in Ohio, in the year 1831. That same year, the “Church of Jesus Christ of Latter Day Saints,” established missionaries to explore Missouri. The most developed city of the frontier times, for the new explorers, was Independence, Missouri. Joseph Smith and his followers declared the city the site for their “temple” and claimed God had selected the place as the “gathering place for his Saints to prepare for the second coming of Christ.” Since then, many proselytized Mormons, have come to Kansas City.

The Mormons brought with them a printing press and started a monthly news paper called the Evening and Morning Star. The newspaper began each issue announcing the Mormons were a “sect chosen by the Lord.”  They also started a weekly publication called Upper Missouri Advertiser. Each article published, ripened a growing hatred towards the Mormons. In the summer of 1833, the citizens of Jackson County, decided that they had to take matters into their own hands against the “pretended religious sect” of Mormons.  At least 700 citizens felt they had to protect society from the evils that the religious sect inflicted upon the community. A mob formed, willing to rid the Mormon immigration peaceably or forcibly. The printing office was destroyed first.

The Jackson County citizens did not see a reason to seek the arm of the law in Missouri. The Mormons, on more than one occasion, had printed Missouri’s liberal Constitution granting Freedom of Religion. The Saints were inviting followers to establish homesteads in the Kansas City, Westport, and Independence area.  The citizens wanted a sufficient solution to rid themselves from the deluded fanatics, pretending to hold personal communication and revelations with the most high God. The behavior of the Mormons and claims of their leader’s direct messages from God, along with the increased migrations of settlers to this area, seeking this new religion, turned neighbor against neighbor.

In those days, when the distances were all different among the hills and prairies, many lives were lost. Without any legal authority, innocent men, women, and children were shot, stoned, and clubbed to death here in Westport and throughout Jackson County. Including a sick women who sat up from her bed, possibly brushed open the curtains to investigate the noise, and was shot in the head. She had no weapon in the home, clearly an innocent bystander. The local officers were appealed to by the Saints, but they did not get any justice from the courts or county officials.

During the Winter of 1833, a group of men gathered in a Westport trading post and general store to plan another attack on the Mormons hiding out at an adjacent settlement on the Blue Valley River. Most of the Mormons had already started migrating to Illinois in small groups. When the last group of Mormons heard that the townsmen were planning another raid they tried unsuccessfully to hide in the corn fields south of Kansas City. They were killed and wounded. The Mormons were driven from the county. The work of the mob was complete.

The Mormons left Missouri, by 1838, and fled to Illinois. In 1844, Joseph Smith was murdered by a mob in Illinois. Smith’s son, lead the thousands of followers into the desert and settled in Utah.  In 1860, the followers of Joseph Smith, became “The Reorganized Church of Jesus Christ of Latter Day Saints.” A sect of polygamist branched off from the church, their doctrine was introduced by Brigham Young.

The Mormon faith continued to grow and they eventually returned to Independence, Missouri. The church’s missionaries reached the Polynesian islands of Hawaii which have brought many Samoan families to our community. Westport’s business owners include Bob’s good friend and hair stylist, Eddy Ahloe. Eddy, has retired his large upscale beauty shop, that was once popularly located on Westport Road, to a simple part-time operation from his home. He came to Kansas City to take care of his parents who moved here to be close to the “Latter Day Saint” Temple in Independence, Missouri. 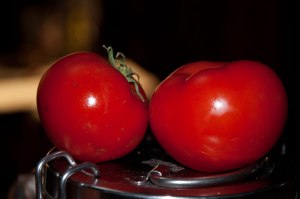 In the Spring something wonderful happens at my house the trading post. The weather warms up. Bob brings home fresh bags of garden soil from the local greenhouse, along with starter plants. Fifty-eight days later, we have tomatoes. 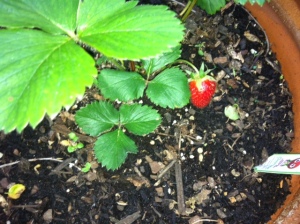 Inside large clay pots that sit on the wood deck stairs, strawberry plants were started a few years ago. Each season a few more berry’s are produced. The first year, we just got one. There are several months to wait before planting season starts. Wishing you many warm moments to share.

Well, there are blogs on gardening tomatoes that I added for your convenience.

I aways like to include related articles. The following link is interesting on the topic of Mormons and the Church of Latter Day Saints.

Thank you for reading my blog, My House The Trading Post.

3 thoughts on “My House The Trading Post, Garden of Eden”