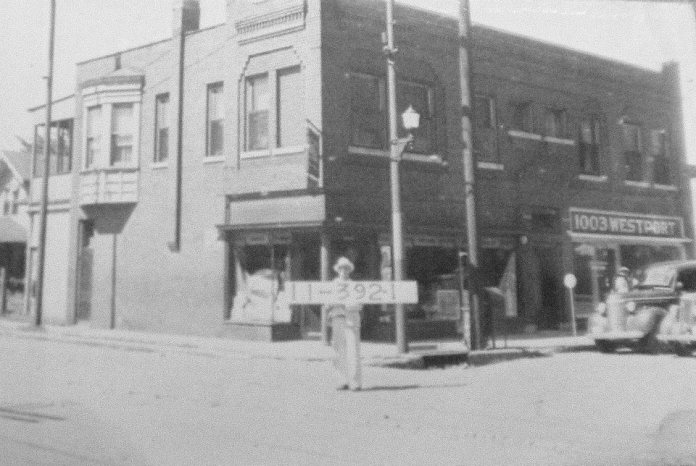 A Brief History of the West Plaza as told by neighborhood historian, Joe Montanari. Originally printed in the West Plaza Newsletter, July-August 2010, page 3.

In 1834, the Missouri State Line was the western boundary of the United States, and the vast area beyond was wide open “Territory.” It was in that year that John Calvin McCoy, a trained surveyor, first platted out the Town of Westport, drawing imaginary lines and boundaries to mark the city streets and dividing the area into building lots. Because it was ideally situated as the ‘jumping off” point for the great westward migration down the Santa Fe Trail, McCoy believed Westport would soon become the “gateway to the West.”  Kansas City did not exist back then; there was just a little notch in the riverbank where the steamboats docked called “Westport Landing.”  Today this notch may still be seen at the foot of Grand Avenue, by the piers of the Old ASB Bridge.

It turned out that McCoy was right. From the early 1840s until 1869, thousands of pioneers arrived in Westport on steamboats and then headed West in covered wagons down the Westport Road and Santa Fe Trail. Westport merchants provided wagons, oxen, and supplies, and the little town prospered for 35 years until the completion of the Transcontinental Railway in 1869 made wagon trains obsolete.

As Westport’s glory faded, the new “Town of Kansas” that had sprung up along the river bank in the 1850s soon eclipsed Westport, its economy fueled by railroads and the industries that railroads made possible: lumber, meatpacking, agricultural implements, and all manner of manufacturing. With its expanding population, Kansas City grew rapidly to the south, annexing Westport in 1898. West Plaza was now part of Kansas City, and it would soon attract the attention of builders and developers.

Land ownership is recorded in a document called a title abstract, maintained at the county courthouse. When Jackson County’s records went digital in the 1990s, many of these priceless paper records were destroyed, but luckily for us, our friend and neighbor, Louise Birt, retrieved hers, and kindly loaned it to me. This document is a written record of each time the title to the land was transferred or disputed, and it contains a treasure trove of interesting details.

The record of Mrs. Birt’s property begins even earlier than McCoy’s first pencil lines. Until 1807, Missouri was part of the French Louisiana Territory, which a cash-strapped Napoleon Bonaparte sold to the United States to finance the European wars. Aside from the few French fur trappers, frontiersmen, and Native Americans who lived here, no one knew the extent of the Louisiana Territory, not even Napoleon, who sold it, or Thomas Jefferson, who bought it. Fortunately, Jefferson convinced a skeptical Congress that it was a pretty good deal for $15 million (about 3 cents per acre). That same year, Robert Fulton’s invention of the steamboat made it possible to navigate upstream on the Mississippi and Missouri Rivers. Enough pioneering frontier families were settling in Missouri that it was admitted to the Union in 1821 as the 24th state. Shortly thereafter, in December 1831, Jackson County was organized.

The first entry in Mrs. Birt’s title abstract is the land patent, dated April 2, 1829, indication the “N.W. fractional ¼ of Section 30, Twp. 49, Range 33, Jackson County, Missouri” belonging to A. P. Patterson. Andrew P. Patterson died a short time later, leaving a widow, Rachael, and seven children.  Because Patterson died without a will, Mrs. Patterson had to petition the court for her inheritance, producing witnesses to her claims. Ultimately, the court determined that ownership would pass to Mrs. Patterson and her adult children. In the course of events, the property surveyed, and the surveyor was none other than John C. McCoy. Gradually, Mrs. Patterson and at least of three of her children sold off bits and pieces of the family farm to Louis Vogel, whose family owned it until long after his death in 1879.

In 1904, Louis Vogel, Jr. sold his part of the farm to the newly incorporated Charter Oak Lot Company, which then formed a subdivision the named “Vogel Heights No. 3,” and platted out the 217 lots that many of our homes are built on today. If your home is located between State Line and Fairmont, between Westport Road and 47th Street, you are living on part of the old Vogel homestead, and that is why it says “Vogel Heights” on your tax bill. (Except for a few recent additions, most of the homes in the West Plaza were built between 1906 and 1930.) In February 1906, Charter Oak sold Vogel Heights to the Bargain Realty Company.

We live in a neighborhood with a rich history…..