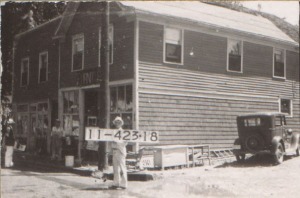 Westport was annexed by Kansas City, in 1898, after voters approved it. The town of Westport would cease; but the residents gained better police and fire departments, street lighting and actual streets, and more schools. With the new streets came water lines and electricity. The phone, along with utilities, like water and electricity expanded from 1879 to 1910.

Novice inventors had been playing around with electricity since the 17th Century, for amusement and other zany purposes. It wasn’t until 1820 that a classroom experiment demonstrated an electric current down a wire could move the dial of a compass creating a magnetic field. The brilliant collection of inventions in the 1870’s connected technologies and resulted in the birth of the phone and many other must-have, necessities for life.

Small entrepreneurs started up electric companies.  Electric companies popped up in every corner. However, only the businesses and wealthy residents, in the core of the city could afford the new technology. Power companies consolidated and as another natural monopoly was created, municipal ownership and State registered companies formed. The city was able to provide essential services like electricity to everyone. By 1920, public power had raised the standard of living and brought electric to the rural areas and even to the poorest of households.

Although the concept of the telephone had been on the inventors’ desks since 1853, the telephone didn’t make an impact until electricity became available. In America we give credit to Alexander Bell and his partner Watson for the telephone, and Thomas Edison for lights. Alexander Bell was the first to make it to the patent office to claim the phone. There were actually many working on various projects that together with trial and error became the most used technology.

The house I live in operated as a tavern or saloon and dance hall until 1904, when the streets started to be paved. The neighborhood started to take on a new life. Instead of dusty cowboys needing to quench their thirst, development brought fathers and housewives with children into the tastefully attractive new homes being built. The history of this old Westport trading post building reflects the changes of the community at the time.

The Vogel family owned the land in 1879, acquiring it a piece at a time, from each of the adult Patterson children. Rachael Patterson had won her inheritance claim to the land in 1873. She was an old woman at this time and living with her daughter-in law North of Kansas City. The public tax records of that year indicate that Mrs R Patterson, widow, received $10 for the sale of spirits and rent. This may also mean, that Mrs. Patterson rented the building to Vogel and had to pay a tax because liquor was sold on the property. Vogel was the owner of the saloon at that time.

The Vogel’s had the Patterson farm until 1904 when they sold it to the Charter Oak Lot Company. While crews cleared the land for the new subdivision, the saloon became a spot for a liquid lunch or beer thirty (a phrase for a beer, thirty minutes after work shift ends).

In the last years of the saloon days, a telephone was installed. For the few residents that patron the bar, the phone was a means of messaging to the outside world. A new generation of patrons came to the saloon, he was the street contractor, the crews of men installing the plumbing, electricity, phones, and the tree cutters.The atmosphere wouldn’t have been anything to write home about. The light would have been dim, and the air stale with the smell of liquor and cigar smoke. Items like pickled eggs from a jar and a glass of cold milk might have been the only food available for a working man who might be waiting at the tavern for a call from his family in Illinois.

By 1906, there were 217 homes built on the Vogel land, owned by the Bargain Realty Company. With new residents moving in, the tavern lost appeal. The Vogel family abandoned the saloon. The building was once again sold. This time it became a grocery store. A convenient place for the 217 new homeowners to pick up an item on their grocery list. A mother could send her youngster off to the store with a handwritten note of the items she needed and the store clerk would fill the order and deliver the items himself.

Several men worked at the grocery store. The building was quite large, one large room on the first floor with a double door  entrance under a porch roof. Inside the walls were bare and simple planks of wood lay directly on the dirt beneath. The hum of a motor for the cooler to the meat counter rattled whenever someone stood on just the right floor board. The building, having been moved some 50 years earlier, would have started to sag in places.

Upstairs was divided. The owner rented an apartment to one of the men who worked behind the butcher counter. The other side, leading down to the grocery store, contained the refuge of the years, old bottles and crates, tools and other artifacts; plus the overflow of merchandise from the grocery store. The gentlemen who worked here were cheerful and chatty, they provided delivery service of their goods.

By 1930, everyone  in the neighborhood could afford to have a phone in the house, the store no longer served the community as a place to quench your thirst. The store owner didn’t know your name or let you use his phone for personal use. Outside the building stands a man holding a cardboard, five feet long, with the phone number of the furniture store that occupied the corner of 46th and Bell. 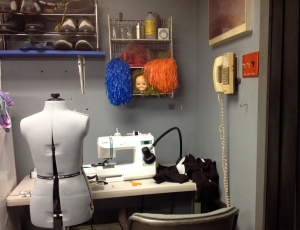 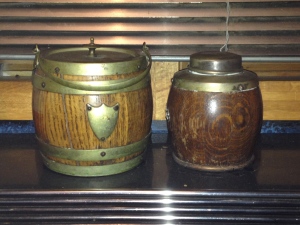