The water has always concerned me. U.S Congressman Sam Graves has made inquiries with the Environmental Protection Agency for an explanation of communities in violation of new ozone standards. Graves noted that the EPA included Clinton and Clay Counties on the list in 2008, because they had dropped the 80 parts per billion to 75 parts per billion on the ozone threshold. His concern was not for the safety of the community but that a smaller community could not afford to comply. This is unfortunate because the smaller community has experienced strange health concerns. However, no two health events were the same or repeatable in another.

As a mother, and a child that grew up in the Missouri town with the “suspected” tainted water, I can tell you I have always thought that there was something wrong with the Cameron water. And have spent most of my life not drinking water because of it. The town is divided, nearly down the middle, as to the safety of the water. I, for instance, feel it is not safe. My background, clinical laboratory scientist and my first husband the city water tester for Elwood, Kansas. The water was frequently tainted, and a boil order issued.

Congressman Sam Graves gave the EPA a tour of the County. That lady, Erin Brockovick, came to town and told every one that the Chromium 6 concentrations were high and caused from a nearby tannery that sold farmers sludge as fertilizer. I do not know what more was done. Only 776 health cases were identified in 2008. My daughter, suffers from a health concern that doctors have not been able to help with. And no one has taken my daughter’s issue as a concern of the water, but they should have, or I should have.

Does history repeat itself? Are selfishness and negativity put aside for the good of all the people? 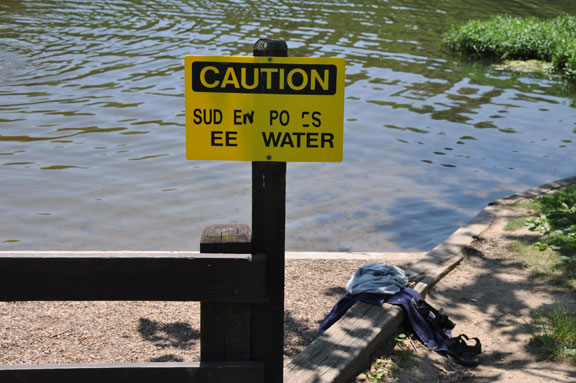 The Chemist reported the water was poisoned. The Internet can bring poison into the home. The first water lines that ran to the homes carried tainted water. In time communities developed a means for filtering the water. The city was also responsible for building better roads and providing street lights for safe passage. In time the Internet community will become safer for all. Eventually it will be offered to the whole community, and to every citizen.  I hope my adult children will be able to have Internet service. Currently, such service is a luxury that many American still cannot afford.

The rules are changing. The technology is evolving quickly. The folks of 1850 accepted all their new technologies; trains, phone, house water, electric, and cars. They kept disputes to a minimum. The individuals within each family of the community helped their city grow. Growth that made some wealthy and others lose it all.

There are two social classes of students that I have met. The first is the public school student; where in the public school less emphasis is given to history and more time is spent on teaching reading and basic arithmetic skills. The second is the private school student; where teachers don’t overlook the grammar issues, and move students forward with information. Administrative concerns in both environments pay attention to scales that measure performance. Kansas City was established by many people with varied backgrounds. Many of the pioneer citizens were educated (lawyers, doctors, nurses, chemists, interpreters, ministers, and teachers…) Kansas City currently has an unaccredited public school district. I wish, concerned more citizens.

In the history books the word monopoly is mentioned. A monopoly is the advantage of one supplier or producer over the commercial market. In America a monopoly exists when all, or nearly all of an article of trade within a community is in the hands of one person or corporation’s control and excludes competition. Monopolies have formed whenever new technology was created. Shortly after the technology was made accessible for the start-up businessman. Many small operators of the same technology sprung up. Corporations were able to meet the demand of the citizens better by buying up all the competing businesses.   However, their product could only be afforded by a few. The monopoly created a power to control prices, to the harm of the public.

It has been an offense of law to possess or create a monopoly power, and fix prices and exclude competitors from the market. For example once the railroads were laid, and a railroad company established; other railroad companies  formed, but there wasn’t enough commercial traffic to continue to lay multiple rails along passages. Soon there would be no room for the additional tracks and you may only end up with only a few riders per train. The formation of the railroad monopolies formed. They established a bigger company and bought up the smaller train companies. Government intervention created a system to limit the monopoly and balance control over the number of tracks and routes. 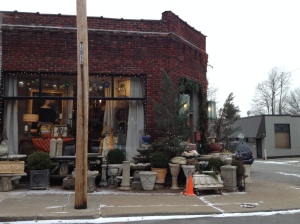 (The two pictures represent the same building; East side, after the civil war, and the West side in 2013)

When the electric companies formed. The light company was the largest public utility corporation in Kansas City. However, first there were several little companies operating that struggled to make a profit. Then the power company formed a monopoly that threatened the price of services, until Kansas City called the service a public good.

When the telephone was installed in the city, four miles of wire and poles were set across town. Two phone companies were in operation until 1908.  When a new phone franchise bought out the original phone companies, the city was able to impose additional taxes, not previously considered, on the companies, their poles and wires, along with a percentage of the phone company’s profits.

Today, a similar situation is being expressed in the healthcare system. Insurance companies, were plentiful, but only a few citizens could afford the service. For years, most doctors wouldn’t even accept a new patient without insurance. Now the US Government is trying to break down the healthcare monopoly and make health insurance an essential service of public good. 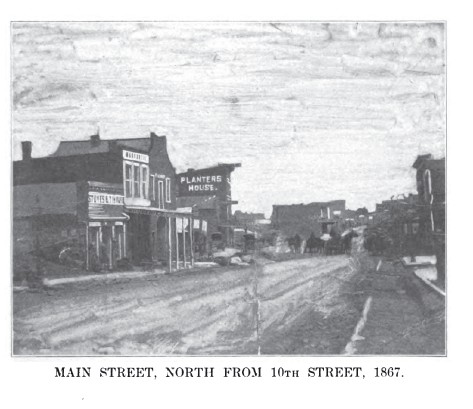 History repeats itself. Monopolies form in every generation. Then municipalities make efforts to bring the essential good to all the people.  Selfishness and negativity is put aside, otherwise, earthly humanity would die by its own poison.

The first settlers sat on a log in the woods marking a map in the dirt that divided out the land for settlements. McCoy, the founding father of Westport, wrote the following information regarding the towns early history.  “In 1825, there was only one point west of Big Blue where white people lived. It was the trading post of Colonel Chouteau. An Indian trail marked the path to follow from the river bluffs to the high prairie. Several homesteads were settled. Robert Pattison, in 1825, settled at the Vogel place. The first Justice of the peace for the settlements of Westport was located near Westport Avenue and the State line.”

My House The Trading Post is located at the Kansas State line and Bell; or in the general vicinity of State line road and Westport Road. The Patterson Plat. The land was owned by the first Justice of the Peace of the frontier town of Westport. The streets have been renamed. Plats did not conform to other surveys of the town. Several land owners named the streets and determined their length and width in anticipation of a main road to Westport and the Santa Fe Trail Beyond. Westport Road has had several name changes over the years. First it started out as an Indian trail. They called it the Santa Fe Trail, for a while. For a short time, the founders referred to it as Westport Avenue.

The map only retains a short passage visible, of an angular street that traveled from Independence through Westport to the Kansas state line. The angle of the street was straightened out after the civil war. When the land was divided into lots for new homes. The woods around my house remained until 1900.  The mud rutted trail that once led from my house, the trading post, to main street downtown was destroyed by the progress of time.

The Water Works was purchase by the city from a private owner in 1895. A new Westport water-pipe was put in. Service was able to be extended to more residents. The original storage basins had no filtration system. Pipes were placed beneath the ground leading from the river, to river, to streams. A storage basin was capable of holding nine million gallons of water and was constructed with pumps to force the water to the street reservoirs.

The city took over the water works system in 1908.  The city council made plans to establish other reservoirs throughout the city. At this time the city knew it didn’t have a good fresh water filtering system. The original estimate to provide adequate filtering beds was three million dollars. Records from the city chemist regarding the purity of the water indicated that there were as many as three hundred germs per cubic centimeter in the city water samples tested. Water containing less than five hundred germs per cubic centimeter was considered wholesome. The chemist did not detect any specific pathogens or disease-producing germs in his research.

At the time, some of the wells from the local springs were determined to be contaminated with typhoid fever which were attributed to several deaths. Although the findings were not unusual, the city chemist fought for improving the water. He concluded that the few deaths from tainted water was too high and could be prevented. A problem for which the city office would have to approve in order to make changes and obtain support for the financial projects of the water works department. The city evolved, adopting several new civil service jobs and municipal departments.

The Internet has brought Google fiber to the neighborhood and a new age of technology should be documented. What is the cost of this service? It goes up each year. As a college professor, I am amazed at the number of students who do not have computers. The number of young ladies with children, working full-time; they do not have Internet. They do not have a budget for Internet service. Internet service is being offered for free in some neighborhoods, through a type of neighborhood coalition or association or contractors promotion. Internet is becoming a necessity like having access to clean water.

The newest technology of all, invites the world into your world.  The Internet can be as intimate a community as the Santa Fe Trail was in 1850. A citizen could sit on the porch of their farmhouse watching the travelers go by on the main route to adventure. I can sit in my house the trading post meeting those traveling the Internet.  In 1850, a trading post owner could set his building beside the road for traveling folks to purchase provisions. I’d like to set up a trading post online and sell books, poems, music, and artwork.

Essential services have improved the quality of life for everyone. We will still have poor folks, and still have capitalism. Sometimes many inventions and new technologies are developed so quickly, that it takes the city, state, and governments time to catch up. Local and Federal Governments have a little trouble reorganizing departments to handle the social need. Occasionally a political vote is needed to determine which, and if any, decisions to move forward. (But, only when race or prejudice is involved, does war break out).