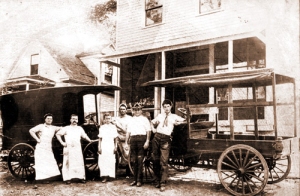 Kansas City was one of the stopping places for early settlers in pioneer days. At one time people traveled through Kansas City by boat, horseback, and stage-coach. Missouri offered all a man could desire, rivers, valleys, hills, and plains. Yet, people were on the move West. The reasons for travel varied from fur trapping, hunting, adventurers or quest for gold.

A small group of men organized to form the town of Westport in the 1820’s. These early settlers liked the wilderness area west of Independence Missouri and North of Saint Louis. Lewis and Clark, years earlier, had noted the territory was perfect for resting the horses with its sheltering woodlands and clear running springs.

The first structures were log cabins. Boards were applied to the esteriors later. The general shape of these oldest buildings like my house, had small panes of glass, and an outside chimney. One of the popular establishments that developed in those early days was that of the Trading Post. Trading practices with the Indians flourished because traders had a great influence with the Indians and the government relied on this relationship. The Indians were extended credit and the traders were soon able to replace the log cabins with two-story Taverns and Dance Halls.

Westport became a rough and rowdy frontier town. The town was overrun with gun-toting renegades, drunken Indians, and Mexican War soldiers. A man named, Vogel, ran a tavern in Westport.  Taverns in those days were used for community business, socializing, weddings, and funerals, which took place in the large main room, often fitted with a bar and some shelves. My house is that tavern.

Most mothers snatched their children from the paths of the madmen and travelers in Westport. However, the Patterson children played with the Indian children from the Kansas reservation and grew up friends with the Indians and had a way with making friends with folks around town. This was a lucky thing for Widow Patterson, because, as she took her “land ownership” case to court, she would need a few secret admirers to help her succeed.

Mrs. Patterson vs. the State of Missouri, Jackson County, Westport Kansas City, was a case that is documented to have started in 1830 and wasn’t settled until 1877. Widow Patterson did win her case. But by then, women’s rights had begun, slavery had ended, and the Indians even moved on. The fascinating part of the story, is how Mrs. Patterson survived all those years and how my present day house may have provided income for the Patterson’s family.

My research has discovered that Mrs. Patterson may have sold whiskey. While, flour mills were in operation in Independence the whiskey business was popular in Westport. By the 1830’s there were two-million people in all the Missouri Territories. The earliest census of Westport stated that there were 12 businesses, including one Indian owned trading post. Nine of those businesses were taverns or trading posts.  Men like John McCoy, had a combination general store, tavern, home, and post office. The women of the time ran businesses, too. These businesses were often, boarding houses, or the women sold fresh bread.

A priest traveling in 1840, to the frontier town of Westport noted that during his travel in the Missouri wilderness, he encountered an abandoned cabin where a poor Indian woman had died a few days earlier. Imagine Westport, where Indians with shaggy ponies tied up by the dozens to poles along the houses and fences of Westport Road. Indians, with shaved heads and painted faces, other Indians with long flowing locks and a few wrapped in blankets, all strolling down the streets and lounging about the shops. Also note, it was illegal to sell whiskey to the Indians.

It is my belief that Mrs. Patterson or her sons ran a tavern on the west of end of town, and sold Whiskey to the Indians. Pieces of history indicate that this building I call home, was once that structure of an old Westport original tavern.  After Kelly’s Tavern burn to the ground as a result of a kitchen fire, men started to remove the old wooden buldings. One owner sold his old wooden tavern building for as little as $5.00.  Several stories indicate that two-story buildings were rolled along Westport road on huge tree logs, pulled my mules. Logs are still under my house, to this day.

Mr. Kelly, a prominent tavern owner, lost his first wooden tavern, at the corner of Westport Road and Pennsylvania Ave., to a fire. Irishmen brought with them a great skill for brick and stone. He hired many talented Irishmen to build a brick tavern on the corner; where it is still in operation today. Kelly’s Tavern in Westport is the oldest surviving tavern in Kansas City. I loved drinking and dancing there in my 20’s (in the 1980’s). Every college kid, from far and near has partied at Kelly’s Tavern.

Other shop owners were jealous that Mr. Kelly had such a fine brick establishment, that many replaced their taverns with brick also. Although, the paper trail ended regarding the purchase of the building and moving it down the street, I believe that a man like, Mr. Harris gave or sold the building to Mrs. Patterson or one of her sons or to someone who rented land. Because the building sits on the plot of land once owned by Mr. Patterson, at the corner of Mr. Harris plat. Later Mr. Vogel purchased all of the Patterson’s land.

My house is about 200 yards from the Kansas Indian Missionary and Schoolhouse. The Indian School is now a museum and tourist site. It isn’t possible to walk to the missionary school from my house today, because tall, modern, cement, stone and brick buildings line the roads and form multiple blocks that create a barrier where the wilderness once allowed a path. The local newspaper of Old Westport, reported that a “particular tavern not more than 200 yards from the Indian Mission was suspected of selling spirits of alcohol to the Indians and contributing to the derelict behavior of the savages.”

I live in one of the oldest wood trading posts, remaining, since the days of the pioneers. It was the last place to stop for provisions on the way west, and the first chance to buy a beer after a two months cattle drive on a dusty Santa Fe trail. (1822-1880)

A boy, as tall as the gentlemen he poses with, stands in front of the grocery store in a picture, from the year 1909.  That young man was 98 years old, when he shared his accounts of the property. He lived up the street from us. He gave Bob, that picture of our house. The man had worked there, at the time of the turn of the century.  As he tells it, his family owned and operated the grocery store.  When the property was first built, the Santa Fe trail and cattle drive came through Westport.  This property, was the last post to buy something for settlers leaving town and the first place the cowboys saw, coming in.

Originally, the two-story building was fifty-yards up the hill. There was a pond at the current spot of the residence. Once the pond drained down to bed rock the house was set squarely by the road. The house was set along the far side of the pond, by engineering logs under the building, and dragging it down the hill with mules. The dirt foundation was replaced with cement, sometime in the 1980’s. In order to pour the foundation, the house had to been raised, exposing the huge logs for the first time since the logs were used to move the structure in 1855.

During the renovations that began in the late 1970’s,  a portion of an old dirt road and cobblestone curb was discovered in the backyard while Bob was landscaping, along with old medicine bottles and whisky jars. The Five layers of roofing and petrified wood on the house, provided an architectural manual of the different carpentry techniques used, as each layer exposed the years dating back to 1860.

In 1860, the place was a  tavern, by 1909 it was a general store. Shortly, thereafter if fell into the hands of a contractor. By the mid-20th century the property had seen its best days gone. In the 1950’s, it was owned by a junk dealer who had the place packed to the ceiling with antiques and had two rental apartments upstairs. It was in that condition that our good friend, Drake, acquired the property and started those late 1970 renovations. He needed a commercial building for, Drake Design, a company that made fiberglass molds for the auto industry.

My husband Bob, bought the property from Drake. After 12 years of solo labor, Bob, was able to convert the house into its present condition and design. Bob has lived here for over 30 years, practiced law, worked on his art, and rehearsed a band or two. I have lived here for five years and absolutely love the place.

The original building was a rectangular, 2 story building with a large main room on the first floor.  In the late 1800’s an American Indian man, who owned the trading post/tavern, enlarged the building on the north side, doubling the size of the  building to 5000 square feet, utilizing a slant in the roof for a lodge pole, the technique matched the traditional structures built by his tribe.

During the spring and summers of 1852- 1855, over 90,000 head of cattle traveled the by-way each year. The Stockyards operated in Kansas City’s west bottoms from 1871-1991. Once the railroad was installed it became the main means of transportation after 1870. These events had a significant impact on my house, the trading post, and its history.